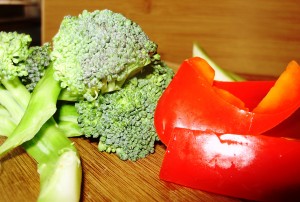 Last week I shared 8 easy steps to help you transition to real foods.  In that post I tried to offer some suggestions to help you move toward real foods.  I thought this week, you might like to see (read) just what my family eats.  These are the actual dinners consumed at my house from Sunday to Saturday. I’ve linked to recipes when I can. I should tell you, that is not always easy. I do most of my cooking by concocting the dishes as I stand at the stove.  Once you have a few simple formulas, it is quite easy to cook in this manner. I released a free eBook recently on this style of cooking. You can get more information about my eBook here.

I try to start my week with a menu plan. This is something that I write down with full intentions of following. Sometimes I do follow it to the letter, sometimes not so much.  I fully admit, the weeks I follow my menu plan tend to go much better than the weeks I try to wing it.  Which may lead one to ask, why wing it? Yeah, I don’t have an answer. 🙂  This week we did pretty good at sticking to the plan, except I was feeling under the weather one day and forgot to put the beans on to soak for the next day.  That was an easy fix, I took a meal planned for later in the week and substituted it.

Speaking of substituting in the menu plan; I have a list of several recipes that I consider “emergency meals”. These are meals that I can put on the table in no time and require very little preparation.  Most do require a few ingredients to be kept on hand, such as bone broth. Bone broth was #3 on last weeks list and I strongly suggest that you add this item into your kitchen routine. It is so easy and can be the basis of several quick and easy nutrient dense meals. I’ll be sure to address emergency meals in a future post. 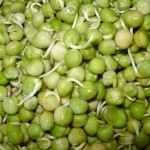 Sunday: Sprouted pea salad. This was a terrific one dish meal.  Don’t have whole peas on hand to sprout? Try this tasty Sprouted Lentil Salad.  We love these sprouted salads.

Tuesday: Pan seared steak, boiled baby reds with butter and sour cream, steamed broccoli topped with homemade mayonnaise.  This was the day I was not feeling well. My wonderful husband took over the cooking duties on this day. We were both happy to have a menu plan in place and the meat already thawed out. 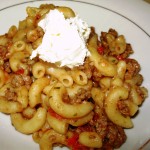 Thursday: Rajma, brown rice, flatbread— Rajma is a very yummy dish made with red beans. I’ll post this to my blog in a few days and then come back and put in a link. We eat beans quite often. They are frugal and nutritious. I usually make Stretchy Beans– a large pot of beans that can be turned into three or four different meals.  The flatbread was made by my sweet 15 year old who specifically asked for it. We usually have our breads/grains soaked, soured or sprouted to help reduce the phytic acid and other anti-nutrients but sometimes we do eat homemade non-soaked items.

Friday: Southwest Spuds, Russian beets, cabbage sauteed in coconut oil and ghee. For dessert we had homemade Cracker Jacks. Southwest Spuds are a family favorite.  In a nutshell, it is a baked potato topped with a quick and easy chili.  Russian beets is adapted from Russian Beet Salad in the book Nourishing Traditions by Sally Fallon and Mary Enig.  It is a delicious way to enjoy beets. 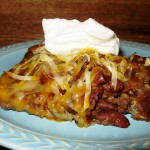 Saturday: Beef and Bean Enchilada Casserole, leftover cabbage, leftover Russian beets.  My 15 year old once again asked if she could make something, this time a dessert. She made a coconut lemon bar that is something she has made before and we all love.  I should point out, we don’t have dessert most nights. I try to make something on Friday night and sometimes I’ll impulsively make something.  But, if one of my children request to make something I rarely say no. I want them to spend time in the kitchen and if the item they want to make doesn’t exactly meet our 85% rule, then I’m okay with that.  That’s one reason we have the 15% 🙂

There you have it. Our actual dinners for the week.  As you can see, most of the meals are quite simple and made from reasonably priced ingredients. We do eat quite a bit of bean dishes at our house.  We do this because beans are cheap and saving money eating beans allows us to spend more on higher cost items such as grass fed beef. This works well for us.  Meal planning also helps with keeping our food budget under control.

Do you meal plan? Do you follow your plan to the letter or do you use it more as a guideline?