I tried to grind wheat into flour today.

Without a grain mill.

I say “tried” because I didn’t so much “succeed” as “not wildly fail.” 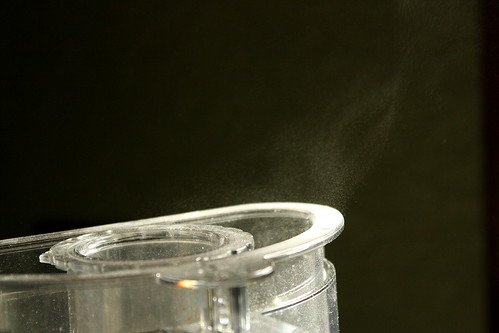 Given I’m so good at digressions, I’m going to get this one right out of the way.

Remember that Saturday Night Live sketch from back in the 80’s, “Funny-Strange, not Funny-Ha-Ha” with Christopher Elliot?

One day I was merrily eating all the gluten I could get my hands on, wondering why I felt like walking from the garden to the house (all of 200 feet) seemed like a marathon and feeling like utter crap all the time, and the next I was diagnosed with this off-the-charts gluten allergy thing. I was, to say the least, disappointed. 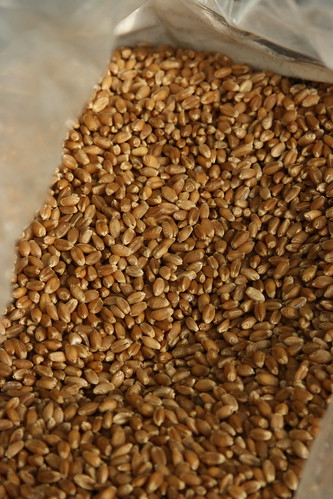 It was strange to think this substance I ate everyday could be the cause of all my odd symptoms – after all, when I ate it, I didn’t feel better or worse (because my body was in a perpetual state of inflammation and chaos.)

It wasn’t until I’d given it up for a few months that I realized how badly my system reacted to gluten. It begins with a strong, unpleasant metallic taste, tingling and numbness in my mouth and esophagus and proceeds from there to even less pleasant things.

The more processed the wheat, the worse I felt; whole wheat, homemade products weren’t as bad as commercially-produced, highly-refined products.

After I cut gluten out of my diet completely, I started feeling better – very, very gradually.

A year and a half after giving up the gluten, I had myself retested and my serum reaction to gluten was within a normal range. I’m not quite sure how that could be, given I still have an internal reaction to it, but I’m pleased to know giving it up has had benefits.

Being of sound mind, you might ask, “what the heck would possess a person with a gluten allergy to buy a five-pound bag of wheat berries?” That’s a darned good question.

There is something fundamentally appealing about wheat – a primal draw. Humans have turned to wheat for nourishment for thousands of years, and while that’s surely not enough time for it to be ingrained in our DNA, it has certainly worked its way into nearly every culture on earth. There is something very satisfying about having a whole pile of wheat set aside in case of emergency – that is, if it’s not poisonous to one’s body, anyhow. 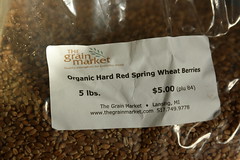 I bought it because of that primal urge, and because it was only five bucks, it was organic, and I’d recently heard about this thing called “soaked grains and flours.” Initially, I looked into this because my dad had mentioned a company up north that sells wheat breads and claims gluten-intolerant people have absolutely no problem with it because of how they ferment their dough. Huh! No kidding!

While most of my gluten cravings have abated, I still do periodically crave Real Bread, Real Biscuits and Real Dumplings, and I know my husband would probably like it if we could have the stuff around from time to time. See, I’m all about the selflessness! 🙂

Not knowing whether this will work, I am reluctant to spend the hundreds of dollars required to purchase a quality grain mill. I know they work wonders, and if it’s something we’d use regularly, I’ll pony up the money.

All of this is a ridiculously long way of telling you about my experiment today. I want to try some soaked sourdough whole wheat biscuits for breakfast tomorrow. A few weeks ago, I tried a non-sourdough soaked whole wheat buttermilk biscuit recipe from Jill at The Prairie Homestead. After eating one, I had almost no ill effects. After eating another the second day… not so much. It wasn’t terrible, but I could tell I’d eaten something I shouldn’t have.

Using fermentation (the sourdough starter) might alleviate some of the remaining issues. I hope!

I put a cup of wheat berries into my trusty Cuisinart food processor, turned it on and immediately fled to find hearing protection. A word of advice – if you’re planning to try this at home, put earplugs in first. It is loud. 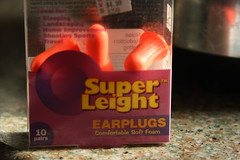 It is also not terribly effective. After my berries had been in the food processor for about 10 minutes, I had a 1/2 cup of flour and a lot of largely untouched, dusty wheat berries to show for it. Darn! 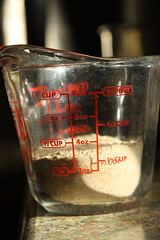 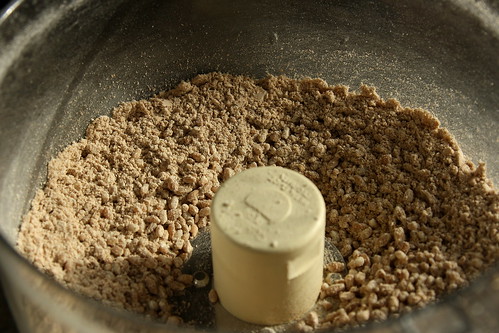 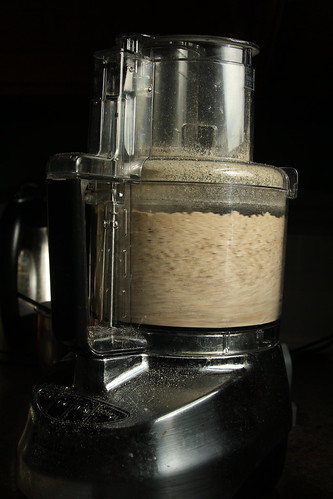 Not one to admit defeat easily, I tried less wheat in the bowl, then more. Aside from varying levels of intolerable loudness, the result was the same – slightly-abused wheat berries that were probably just chuckling to themselves and feeling pretty unthreatened as they danced around the blades on a bed of air.

Fearing I would have to bust out the mortal and pestle for a few hours, I cast about the kitchen for another appliance. The coffee grinder might have worked well, but its bowl is about 1/4 cup in size. Then I spied my neglected blender – aha! Perhaps, just maybe…

It was also loud, but less so, as the blades were covered by the wheat. Five minutes in the blender did more than 15 did in the food processor, for sure. To get the entire four cups I needed required a lot of bumping, thumping, shaking and bad language as the blender worked diligently. After 15 minutes or so, I had to turn it off and let it cool down – I didn’t want the grain (or the machine) to get too hot. 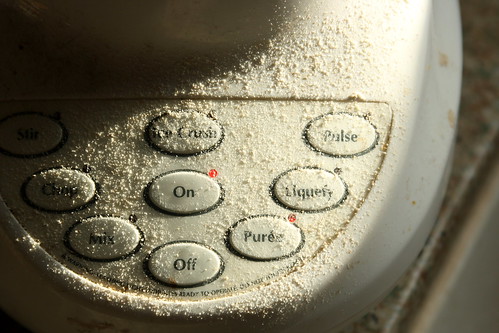 When I announced my plans to try grinding wheat in a food processor, a friend said I’d want a dust mask. That was surely true for the blender portion of the afternoon – dust went everywhere. I inhaled a vast amount of it, and I can feel my trachea tingling slightly (an odd sensation to be sure.) I know, I know – that’s A Bad Thing, and I probably shouldn’t even be trying this in the first place. Trouble is, I’m stubborn. I have to try something before I’m fully convinced I can’t (or shouldn’t) do something. Some might call it “stupid.”

Indeed, if you have a gluten sensitivity yourself, please don’t try this experiment unless you’re willing to suffer through whatever your particular glutenated symptoms are – I’m wagering a day or two of potential discomfort against a lifetime of potential good bread. If your allergy is severe, trying soaked/fermented grains is a really bad idea! I’m not a doctor or medical professional, your mileage may vary, et cetera and amen.

Naming this substance “flour” might be overstating things – it may be better described as a meal, due to the granularity. Some of it is super-fine, some medium, some is… a bit chunky. It should make for an interesting texture in the biscuits… I hope.

I’ll report back on how things go (but I promise not to talk about my intestines. Much.) 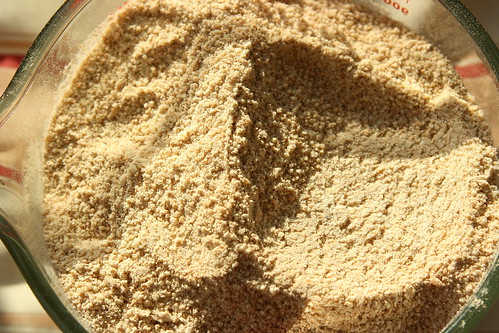 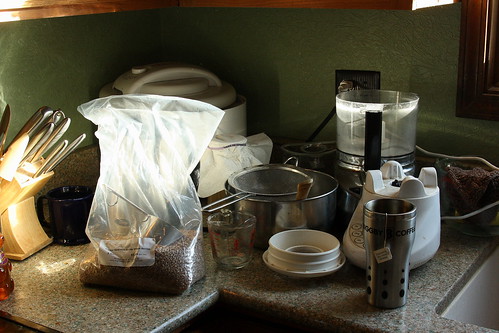 And that’s not counting the bowls, utensils and blender bowl already in the dishwasher. Not to mention the wheat dust everywhere.

Don’t use a food processor to grind your grains. If a grain mill is out of the question, try a blender or coffee grinder.

After all the reviews I’ve read on sites I trust about how amazing they are, I’ll be sold just as soon as I confirm (or disprove) I can tolerate soaked/fermented gluten.

Author: Erin D.
Before You Reach for the Chocolate Sauce…
So far, so good!

3 thoughts on “Misadventures in Homesteading”

We use cookies to ensure that we give you the best experience on our website. If you continue to use this site we will assume that you are happy with it.OkPrivacy policy